Back in 2008, I reviewed Haro’s top of the line BMX race bike, their 2009 Team Issue. That was a new type of race bike for Haro, representing a new philosophy and a more hardcore approach to serious race machines. Haro factory AA-Pro Derek Betcher designed the Team Issue, and I instantly liked the bike, as did anyone that rode it. It was well balanced, and had some pretty good components on it and it became clear that the Team Issue was Haro’s first shot across Redline’s proverbial bow on the complete BMX race bike market. In 2010, Haro stepped up their game yet again, introducing a new colorway and improving the components on the Team Issue. Although it was an awesome bike as it was, it was rumored that Haro was going even further for 2011 with a completely new race machine, featuring an all-new frame and high-end components. Well, they did – and it’s the best race bike Haro has ever made. 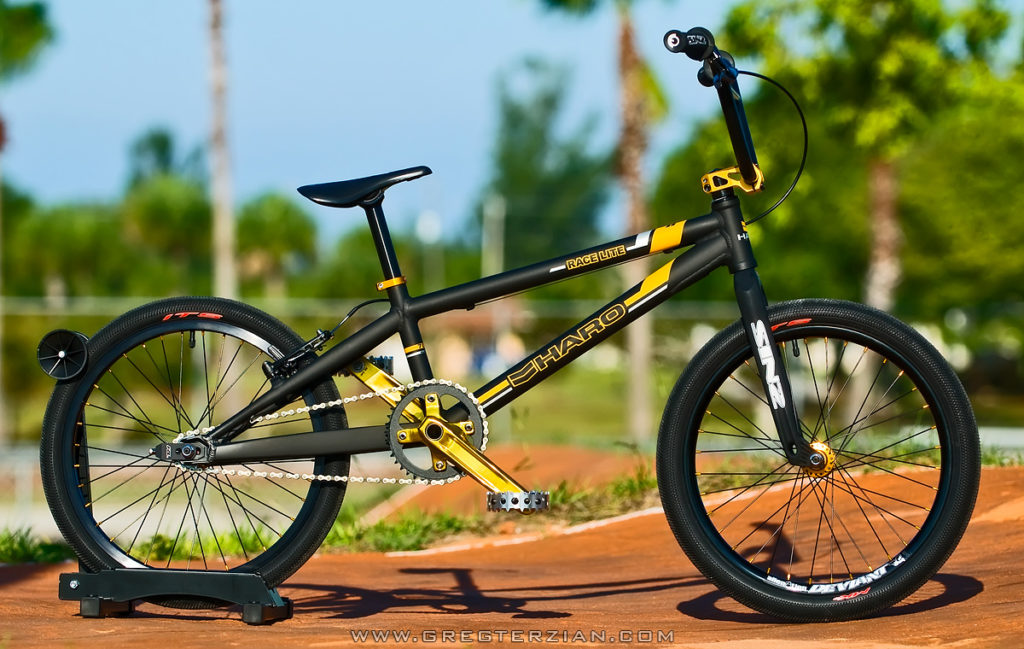 2011 Haro Race Lite is their lightest race bike yet

The 2011 Race Lite is Haro’s new top dog, and the redesigned Team Issue remains in the lineup as a more affordable race solution, though even that model has been upgraded. For starters, Derek once again did the design work on this machine and it shows – it looks fast just standing still. But that’s not the entire story. A quick look at this bike shows that Haro is more serious than ever about equipping a high end race bike with pro-level, race-ready components. Adding to that, the flat black-and-gold finish and gold anodized hardware look rad as heck. 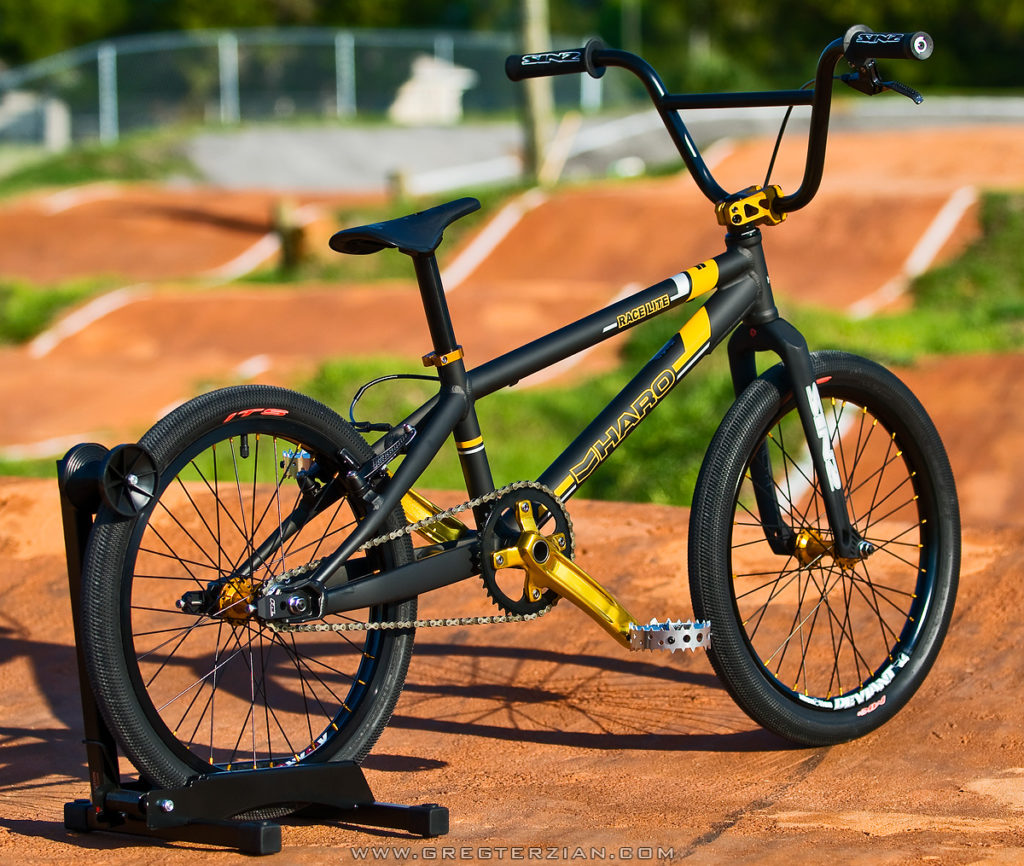 The Race Lite is built upon Haro’s new ultra-light 7000-series aluminum Race Lite frame. That’s the frame their factory pros race on, and it features a redesigned rear triangle, sans the integrated chain adjusters (which I did not like much) and a redesigned internal Campy-spec head tube. As expected from Haro, the welds are even and clean, with no flaws apparent in the metal or finish. The Race Lite frame is lighter and stiffer than the Team Issue frame, which was, and still is constructed out of 6061 aluminum. For those that do not know, 7005 aluminum is lighter and stiffer than 6061-T6, and I’m sure you already spied those massive box chainstays on the bike; I don’t think frame-flex will be an issue there. To be specific for the weight-conscious, according to Haro’s spec, the Race Lite frame weighs in at 3 pounds, 6 ounces. That’s lighter than just about any other race frame out there (especially in this price class), and about a full pound lighter than the lightest chromoly race frames today. 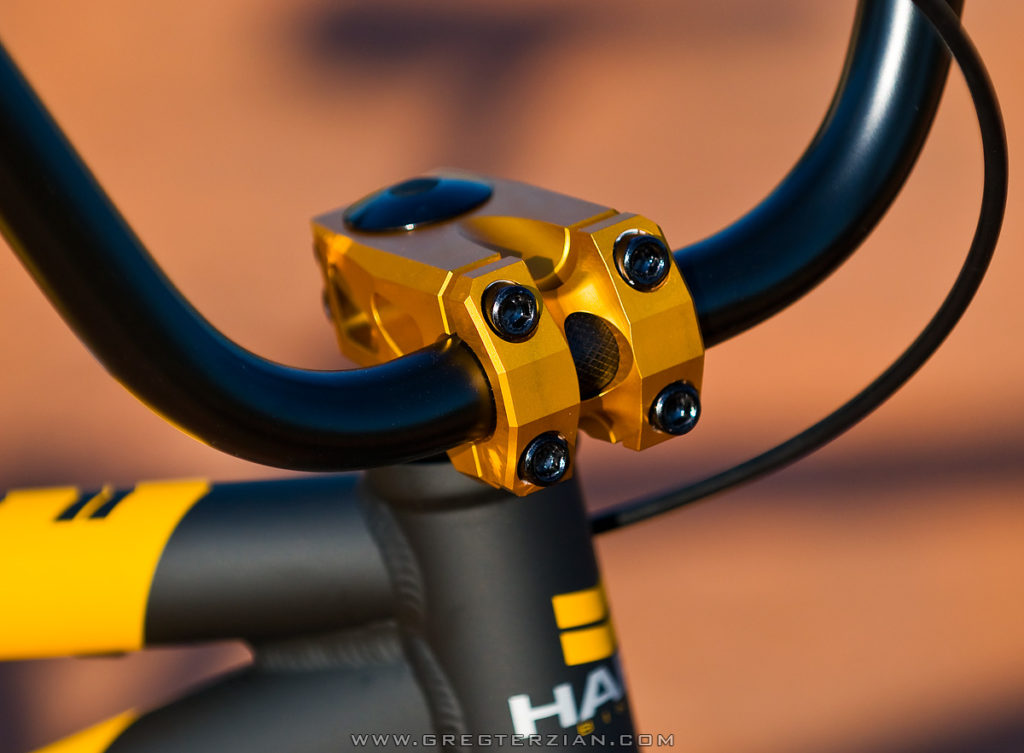 So I had my good friend and former NBL A-Pro Ryan “Z-Man” Zielinski give the new race bike a good workout at our local track here in Cape Coral, Florida. For those that don’t know, Z-Man does not like to ride clipped in, so this was a perfect chance to also see how the new Hutch Beartrap pedals perform. This was a lot of fun, so keep reading… 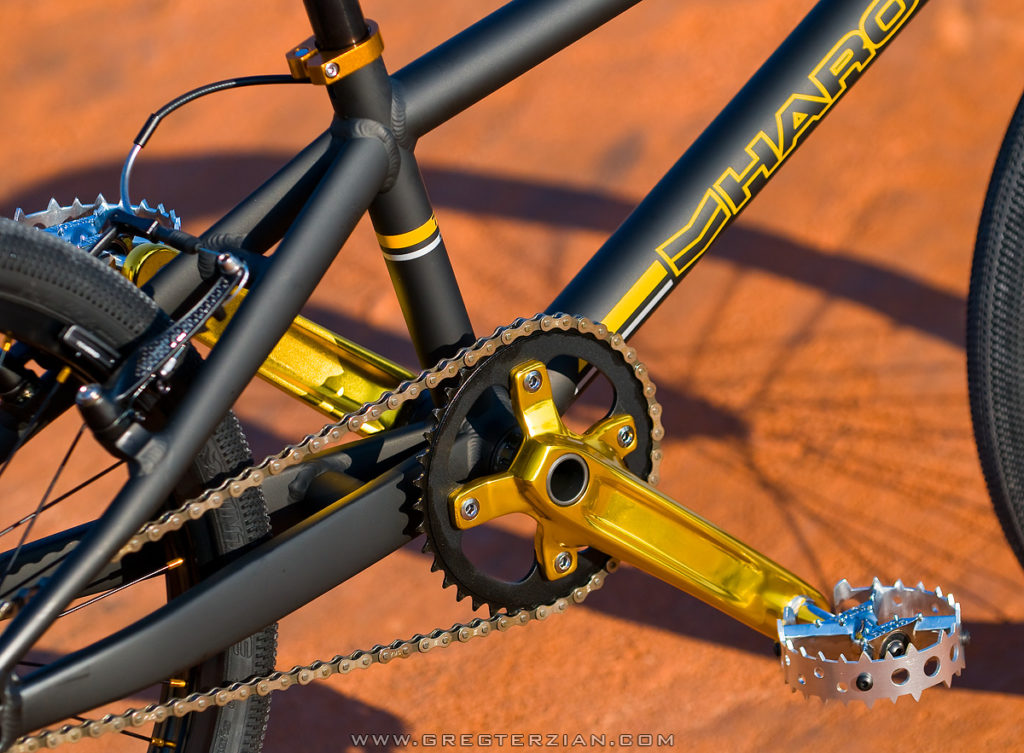 At first glance, you’ll notice that the Race Lite (and Team Issue, for that matter) are no longer equipped with the AC Hammer Pro crank set. I actually liked the Hammer Pro on the 2009 Team Issue, however allegations of these cranks breaking began to make their way on internet forums. AC redesigned the Hammer Pro as a result, and when I sampled a set on the 2010 Team Issue, I was very disappointed in the crank’s quality. The crank spindle-to-bearing tolerance was too relaxed, to the point where there was noticeable free play inside the bearing. That was the first time I had ever seen that kind of issue on outboard bearing cranks, and I removed them before use. Haro listened to their customers, who seemingly didn’t like the AC crank set either, and now use an unbranded crank similar to Crupi’s Rhythm Pro units. 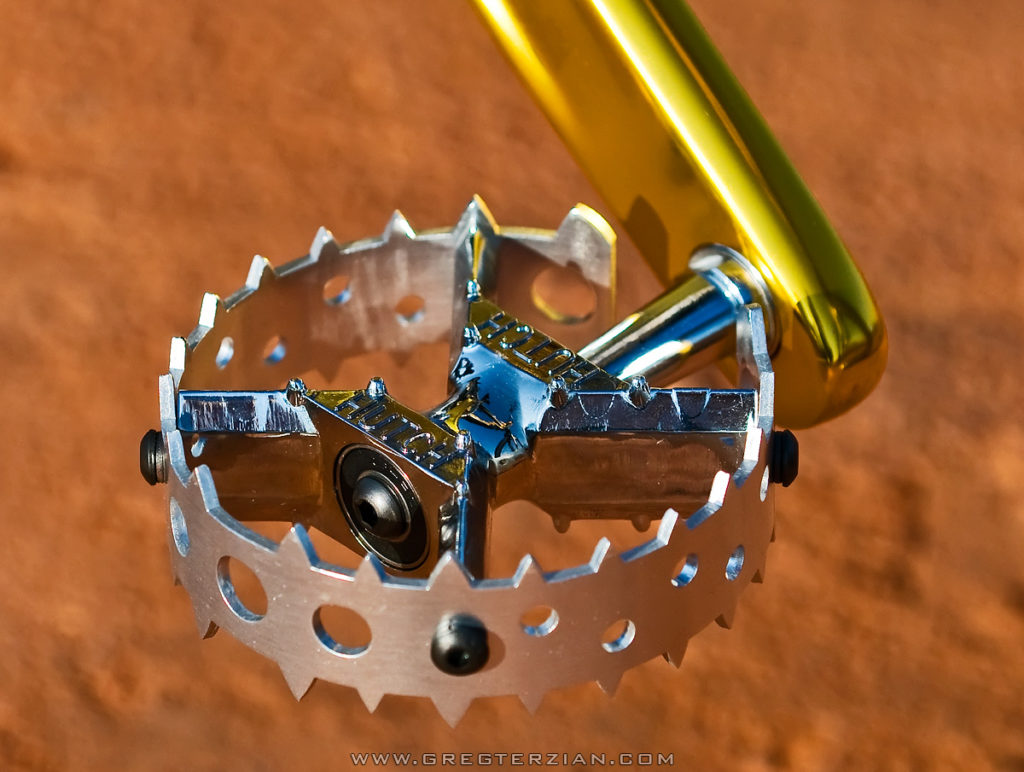 The Rhythm Pro is basically Crupi’s answer to the Shimano DXR, and features the same four-bolt 104-BCD chain ring pattern as well as forged [solid] alloy arms with the already-recognizable two-piece, outboard bearing design that Shimano and many other brands use now. Unlike the AC cranks, the Rhythm Pro cranks feature steel pedal inserts, and during testing the crank set willingly accepted some pretty harsh punishment without issue. Out of the box, there was very little chain-hop and crank arm spacing as well as the chainline were acceptable. But we’re getting a bit ahead of ourselves here – let me regress a bit… 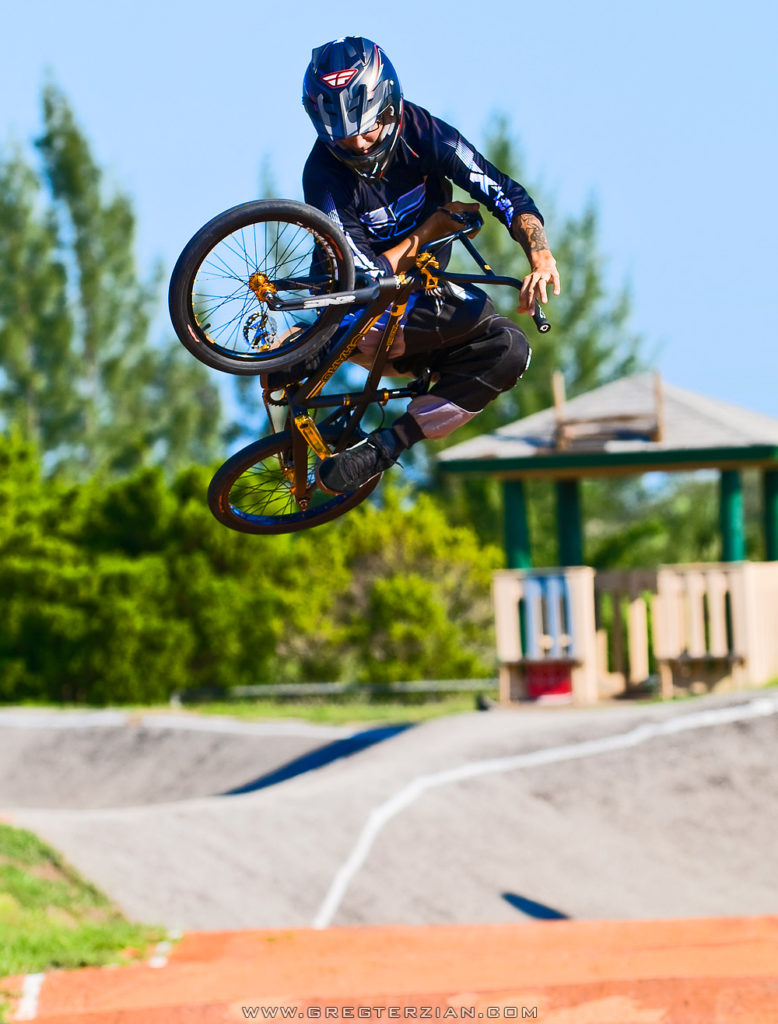 When the box arrived for this bike, I thought to myself, “This box is awfully light; is the entire bike really in here?” Yeah, it was all in there, and the Race Lite lives up to its name – the complete bike out of the box weighs in at 20.25 pounds. I don’t think there’s any other complete Pro XL race bike that’s lighter – and those carbon fiber Sinz forks sure look sweet. The Race Lite has some pretty awesome components on it, including the above-mentioned Crupi cranks, Alienation Runaway/Deviant rim combo with sealed cassette hubs, the super-rad Sinz carbon forks, pivotal seat, and a really nice machined front-load stem that did not slip no matter how hard we tried. The Tektro MT-50 brakes did their job well and the carbon Tektro lever looked very cool doing it. Finally, the Race Lite addresses a former complaint of mine, which was the former use of heavy, high-tensile steel handlebars – I’m happy to report that chromoly bars are now standard, and they’re not overly-large either. They’re just perfect actually, if you ask me. 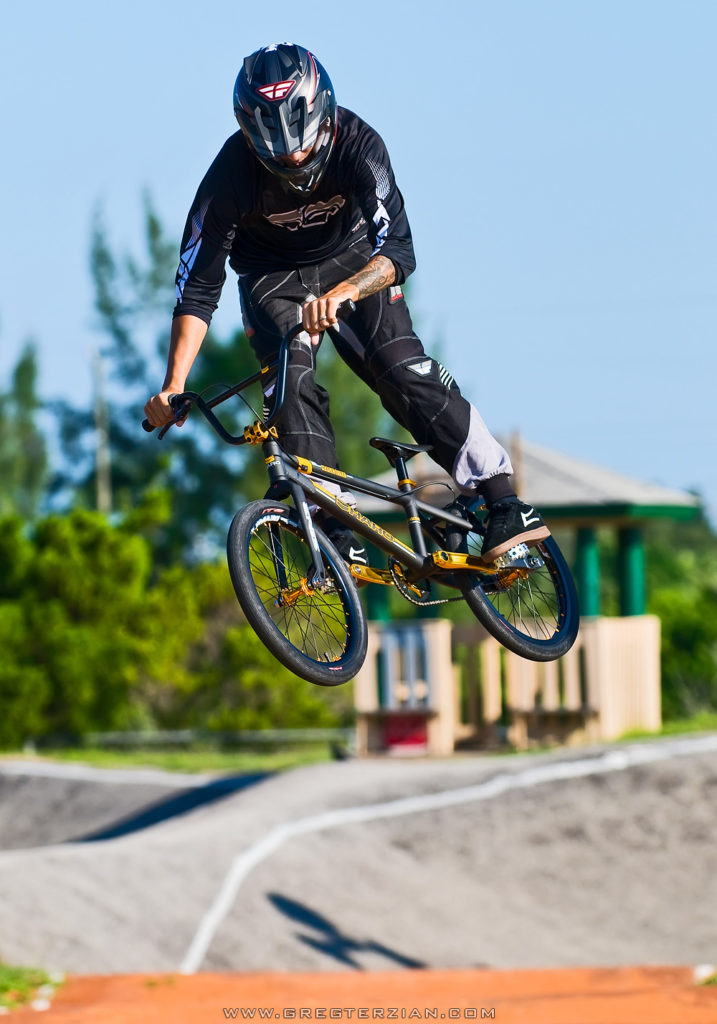 As you can see, we’ve forgone the stock DX-style pedals in favor of Hutch’s newly reissued classic Beartrap pedals. These pedals are basically the same killer units we dreamed of owning as kids, but they’re even stronger. The Beartraps go to show that a classic design like this remains popular because they work extremely well – if your feet slip off these, then it would have to be intentional. Next to riding clipless, the Hutch pedals rock the BMX world by sticking to your feet like their namesake, and the 4140 chromoly (also available in titanium) spindles they ride on didn’t sweat the abuse they endured. Speaking of sticky, the Intense Micro Knobby 2 tires give all the grip you could ask for on a modern track, and they’re rated to 110 PSI.

Alright, I’m sure you’re wondering by now how the bike actually rides, and as with any frame designed by pros, it’s nicely balanced. I heard no complaints from Z-Man as he continually launched the Race Lite off every double and triple in sight. Over and over, lap after lap, Haro’s super-light race machine performed perfectly, as did the Hutch pedals. This was no casual riding session – I wanted good photos, and Z-Man kept dishing out the punishment on the bike so I could get what I wanted. I found the bike to fit me well, which was surprising since I usually ride XXL-sized frames, and it feels fast and stable. Everything felt right where it should be, which is not surprising on a product designed by race professionals. 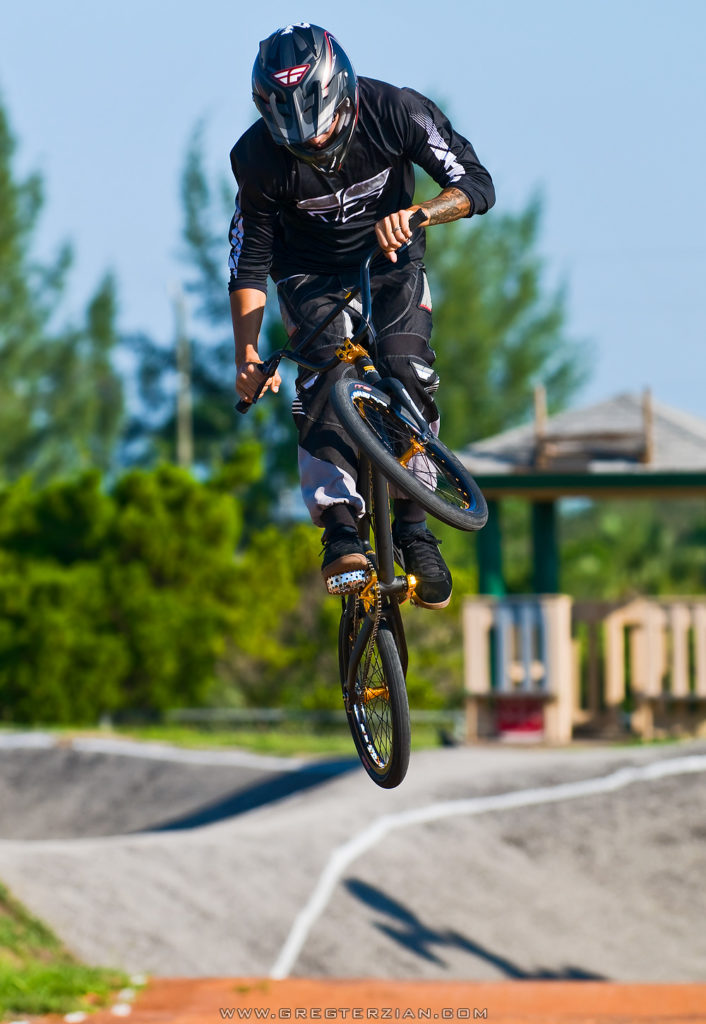 So at the end of the session, the bike was ready for more. No dented or tweaked rims, no slipped stems, and nothing out of place. The cranks were as stiff as good race cranks should be, and next to a set of Shimano DXRs or Saints, you’re not going to get a better set on a factory complete bike. The frame’s geometry feels natural and balanced, with a finish that’s killer. I don’t think I could have stressed a bike that much in an entire year of riding. Now that I finally have my turn with this bike, I sure will try, though.

The Race Lite has an MSRP of $860, which is quite a compelling price point considering the parts that make up this bike and its performance. Right now, this is one of the best race-completes you can buy at any price, and it will get you into the game without having to worry about swapping components to race it hard. How often is it that you can say a complete bike is nearly perfect? Almost never, but this is that one rare circumstance. 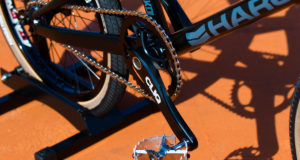